Irishdance.co.uk / ConorAcademy.com Home of the Conor Academy of Irish Dancing 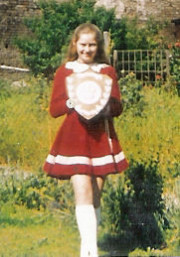 Bridie (nee Bransfield) has been dancing throughout her life since she was just 5 years old, performing at many Feis’ and peaking when she became a World Champion as part of the Terry & Nancy Bowler's world-beating all-girls  junior  figure team.  She went  on to win further silver and  bronze medals at Oireachtas Rince na Cruinne (the World Irish Dancing Championships).

She recalls starting her first class at St Andrews Primary school in Streatham with only three pupils; Anne-Marie, Gerrad and Bernadette McCarthy. As it turned out, the McCarthy family had a lot in common with Bridie’s, as both Mums were Donegal girls and both Dads were Cork men – a coincidence that brought the families together and has forged a strong bond ever since.

In 1993 the Conor Academy of Irish Dancing was rebranded (being named after their first son Conor).

In line with the rules of An Coimisiún le Rincí Gaelacha, Bridie has completed an approved course in "Safeguarding & Child Protection"; she is "First Aid trained" and holds an "Enhanced DBS (CRB) Disclosure".

Having asked Bridie what her most memorable moment was – this was her reply; “Every time I see my pupils perform, is a memorable moment, whether it is their first class feis, or display, or competing at the Great Britains or at the Worlds. One former pupil is currently tasting success whilst touring the globe with Riverdance.  I still get a wonderful feeling knowing they are all there because of me, that I’ve touched their lives in a small way”.